Blogs produced using Blogger work well if you don't have to rely on mobile connections in the field; but unfortunately their mobile app is limited, buggy and Google is doing a poor job of maintaining it. So I have decided to close down the blog here, take a forced march over to WordPress, and continue the blog there. This is the link:

There will be no more posts here from now on, if you want to follow my exploits in the trenches in July 2014, you will have to go there...
Posted by Justinian-T at 10:03 AM No comments:

Looking forward, and back

After leaving the site in mid-July it was interesting to watch further progress via the official blog, including the excellent video reports. The area Sean and I worked on did not receive much more attention; instead the southern end was pushed back another 3 meters or so. As it turned out, we had been very close to reaching the end of the robber trench.

TV historian Bettany Hughes visited the site on the last day of official digging, and tweeted a nice picture that covered our end of the trench very nicely. I reproduce her picture below, with some embellishment - the dotted yellow line indicates the edge of the trench as we left it, the red circled area is roughly where Sean and I were digging, and the blue arrowhead marks the stone I pointed out in my July 9th post (red arrow on day 7): 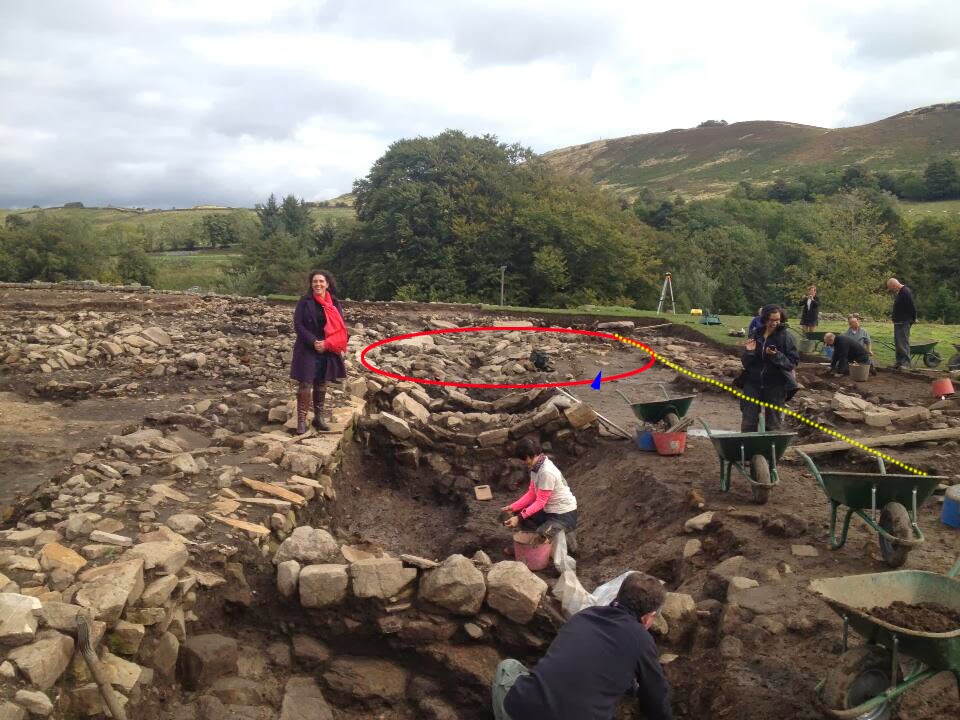 The photo nicely shows the huge collapse in all the late structures running up the centre of the picture, presumed to be due to a ditch from an earlier structure.

Sean and I enjoyed it so much, we decided to have a go again! The November 1st application frenzy took place at an even more astonishing pace in 2013; and despite getting onto the site within the first second of it opening at 8:00 AM Eastern I was unable to get us both a slot; it appears to me that the system gets overwhelmed by the load in those first few minutes - I had a spot in my cart but when I clicked to make it two my cart suddenly became "empty"... However, with a little patience and some help from the Trust I was able to snag two spots for us later in the day. So, we'll be getting tired and dirty in the same post-break fortnight in 2014, combining it with a family holiday in the Lakes, taking in the start of the Tour de France. Should be quite a trip.
Posted by Justinian-T at 10:16 AM No comments:

Another warm day, with constant sun but a nice breeze swept the trench and kept the midges away again.

Sean went back to continue his spot beside the huge flags, I moved slightly over into an area within the massive flags that looked sure to have more floor waiting to be revealed. Sean quickly notched his second small find of the fortnight, something that might be dateable. He followed it up in the afternoon with another find, a nice decorative piece that I wish I could describe in more detail. Finds in my area were probably the most meager of the whole trip, as I reached the buildings north wall with about an hour to go. A little pottery and nails and, more disappointingly, no real sign of flagstones, but with some smaller dressed stones looked to have been laid as part of the floor in one area. Here's a final shot of our little piece of the trench, Sean's last day zone in blue, mine in orange: 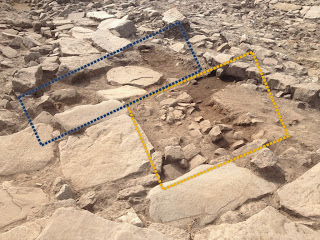 And a final look of the large room in the building that is officially described as being "very late" (because the bath house stones in the floor means the bath house from which they came must have been non-functional by then), with a floor constructed from a combination of large flagstones possibly stolen from vicus building foundations, voussoir stones stolen from one of the bathhouses and dressed wall stones laid on end: 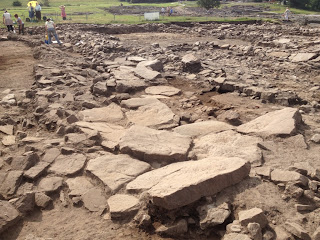 Digging ended half an hour early for Andy's summing up of progress over the two weeks; Justin Blake posted another of his excellent video blogs today that explains it much better than I can, and he covers the flagged area and the multi-voussoir zone so take a look there for the final summing up. Here's how the trench ended up, with the robber rubble all gone: 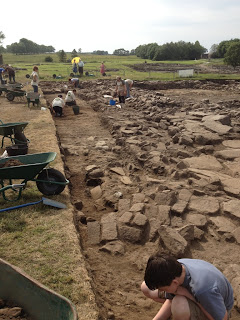 After some excellent fish and chips in Haltwhistle (from The Fryery) we managed to raise enough energy to make the short climb up Barcombe Hill. Some glorious views among the grasses and flowering heather, with a brisk wind hurrying through the Tyne Valley. Getting a little dark for photos, but here's the last shot before we headed back to the car: 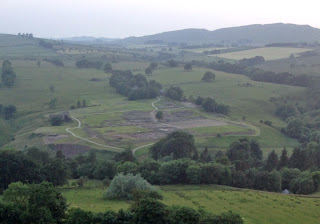 The end of a truly fabulous two weeks of digging, lots of finds, buildings emerging, friends made and all kinds of great times had by all. Now to figure out how quickly we can do this all over again...
Posted by Justinian-T at 3:08 PM No comments:

Flags all over: Day nine

An almost windless, warm day with barely a cloud in the sky most of the day. Not quite as warm as Tuesday, but the ice cream window was very popular at tea break: 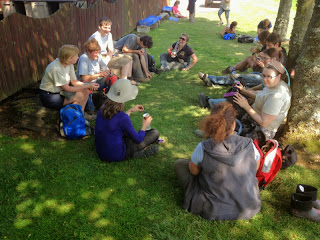 The morning began with a surprise. Justin moved Sean and I out of the robber trench, into the area either close to where we'd started on day one (me), or adjacent to where Mark had found some huge flagstones (Sean) a little to the east. Claire and Peter took over the remaining areas of robber trench rubble we'd left yesterday afternoon. Sean quickly found two more huge flags, and after a brief period of indeterminate small stones and soil, I began to find large flat stones that had clearly been part of a floor, including yet another voussoir stone reused from the bathhouse. Most of my flagstones were smaller than Sean's and tilted significantly (orange) so don't look as clear or impressive as his (blue): 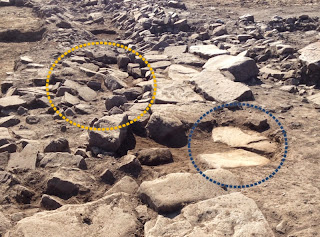 I had another couple of relatively nondescript small finds, as well as an extremely long nail, about 6 inches long. Gay hit a red hot streak though, with about four small finds, each a very different from the others. The remaining part of the team in the robber trench made good progress and only about 10% of the rubble remains to be shifted tomorrow: 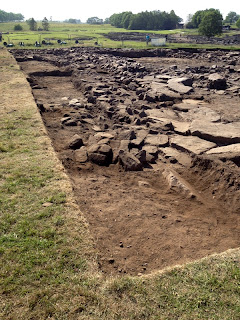 Forecast for tomorrow is for sunny, even warmer weather, hopefully with many more flags scattered liberally...
Posted by Justinian-T at 1:55 PM No comments:

As promised, the morning was much cooler and overcast, making for a much more pleasant day for digging. No sign of rain and the sun did finally emerge occasionally by mid afternoon, but with a cool breeze to prevent the temperature rising to the heights of days six and seven.

Sean, Claire, Erin and I spent the morning helping the three-person pot washing/processing team at the tea hut; Sean and I managed to get through just two of the 20 or so bags waiting to be washed, sorted by type, weighed and logged. One of the bags was V13-59A, which we had helped fill on day seven, corresponding to the robber trench context. Seeing all the material produced from just the last couple of days made it clear how the site as a whole has so far yielded 500 tons of pottery. The time went by quickly, including a bag from V13-60A which consisted mostly of bone, while being entertained by a varied selection of jokes and songs from the thirties to the fifties from Eddie.

During the lunch break Andy took some of us over to the North Field for a quick look at the interesting developments there. Since the Canadian students left on Friday (day five) and their supervisory tandem of Alex and Beth also took a well-deserved break, the North Field trench has been quiet, but we had heard of some interesting news about one of the ditches. As they had pushed to define the ditch edges they had found more than they had bargained for, a cobbled surface that looks a lot like a road: 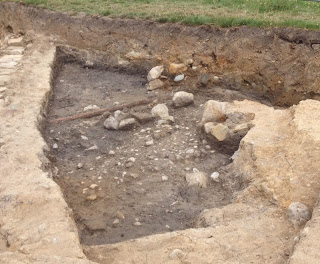 It will require a lot more digging to confirm it, but this just might be the first glimpse of the Stanegate at Vindolanda - the military road that was established in the 1st century AD under Agricola (ie: well before Hadrians Wall was built in 122). The line of the Stanegate is well known in many places on either side of Vindolanda, but has not been precisely located near the fort itself.

After lunch Sean and I returned to the trench and pushed further west into Claire's old trench. The depth at which the robber rubble ends and a more solid-packed, clay-like level begins remained about the same, except for an interesting spot near the southern edge. Here I found at least four fairly large and well situated mudstones forming something that looks more than just an accidental accumulation of stone; the clay around it also seems to be higher than the nearby parts of the trench. Justin Blake took a look and thought it might be consistent with a 4th C wall foundation; it will be very interesting to see how it pans out tomorrow as I remove the rubble overburden in the morning. Here's how it looked at the end of the day, with the possible wall foundation indicated by an orange arrow: 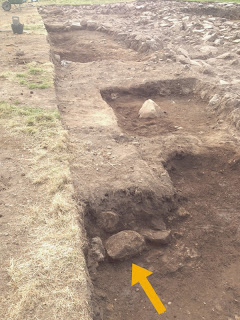 The only other news is that the huge flagstones at the eastern edge of the trench are not part of the intervallum road, but in fact are thought to be the floor from another late 4thC building. How they maneuvered those massive stones into position without modern equipment is amazing.
Posted by Justinian-T at 2:59 PM 2 comments: 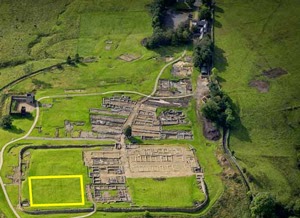 Vindolanda is a Roman fort just south of Hadrian's wall. The first fort on the site dates to the late 1st century AD and was followed by a succession of later forts, built one on top of the other, over the next ~300 years. Adding to the site's interest, an active and large civilian settlement or "vicus" adjoined the fort for some of this time. The Vindolanda excavation is therefore revealing key information not only about the military history of Britain under the Romans, but also about the lives of ordinary people.